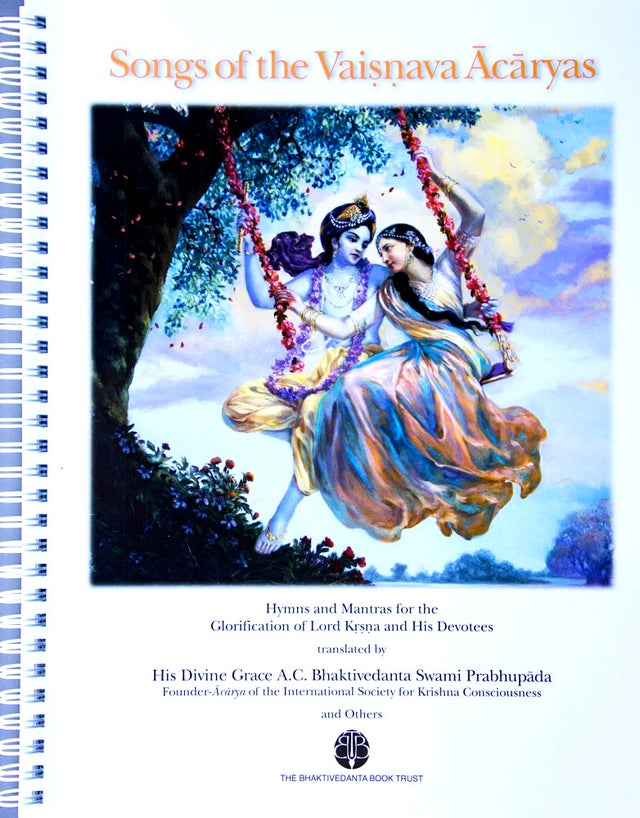 Songs of the Vaishnava Acharyas is a collection of prayers by some of the prominent acharyas—teachers—in the lineage of Krishna consciousness throughout history. It contains all of the standard songs sung in Krishna temples every day, as well as many bhajans (devotional songs) traditionally sung during special occasions, festivals, and other devotee gatherings.

This book was compiled by Acyutananda Dasa, one of Srila Prabhupada's early disciples; Srila Prabhupada himself authorized the project and wrote the book's Foreword. He mentioned many times that such songs are nondifferent from the Vedic mantras:

"I am greatly pleased to see this collection of songs composed by Thakura Bhaktivinoda, Narottama dasa, and other great acharyas of the Gaudiya Vaishnava community . . . Songs composed by the acharyas are not ordinary songs. When chanted by pure Vaishnavas who follow the rules and regulations of Vaishnava character, they are actually effective in awakening the Krishna consciousness dormant in every living entity. I have advised Sriman Acyutananda Swami to sing more songs of the Vaishnava padavali and record them in books so that my disciples and others in the Western countries may take advantage of this chanting and thus advance in Krishna consciousness more and more."