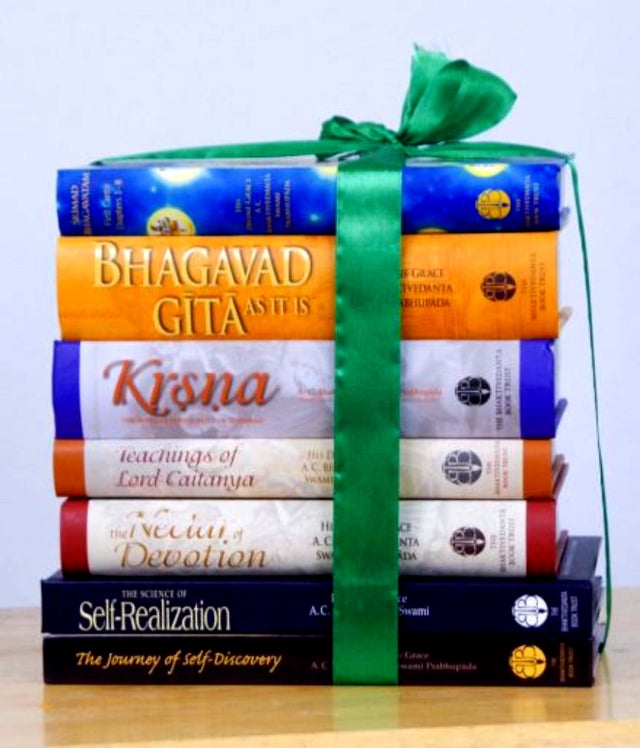 Saptarishi Set is a set of following 7 literatures

Srimad-Bhagavatam, an epic philosophical and literary classic, holds a prominent position in India’s voluminous written wisdom. This ancient text touches upon all fields of human knowledge, and is also a spiritual encyclopedia.

The Bhagavad-gita is the compact essence of all spiritual philosophy revealed in a most unlikely setting, at the onset of a world war that occurred nearly 5000 years ago. “Bhagavad-gita As It Is” is unique among the myriad Gita commentaries because the translations and purports are the work of His Divine Grace A.C. Bhaktivedanta Swami Prabhupada, who represents a line of teachers in disciplic succession from Krishna Himself. Srila Prabhupada’s faithfulness to Krishna’s teachings—and expertise in presenting them to western readers—make Bhagavad-gita As It Is true to its title.

3) Krsna: The Supreme Personality of Godhead

Srila Prabhupada wrote “Krishna Book” before he had even fully completed his translation and commentary on the Bhagavatam. He wanted people to hear about Krishna the person and His activities, in English, from an authorized representative of the Krishna-bhakti tradition. As he mentions in his Introduction, this was so they wouldn’t risk mistaking Krishna to be just another human being and his pastimes as mundane adventure/romance stories. It should be said, however, that fans of adventure and romance will find nothing lacking in this contemporary recounting of Krishna’s activities.

Teachings of Lord Caitanya is an introduction to the most advanced and esoteric subjects contained within the Bhakti philosophy, as presented by Chaitanya Mahaprabhu. The text is a summary of the multi-volume biography Chaitanya Charitamrita, which contains some of the most elaborate, technical, esoteric, and ecstatic revelations of the science of God found in any scripture.

The Nectar of Devotion is a summary study of the Bhakti-rasamrta-sindhu, Srila Rupa Gosvami’sliterary masterpiece. This is a retelling of the essence of a devotional classic composed in Sanskrit that describes the complete science of bhakti-yoga, i.e., linking with the Supreme through transcendental loving devotion.

6) The Journey of Self Discovery

The Journey of Self-Discovery is a collection of transcribed conversations and lectures by Srila Prabhupada on a variety of subjects, including spiritual economics, superior evolutionary models, the means for achieving global unity, overcoming scarcity, and predictions of the future state of the world.

7) The Science of Self-Realization

The Science of Self Realization is a collection of interviews, lectures, and essays from the Back to Godhead magazine covering topics such as the goal of human life, seeking a true spiritual teacher, reincarnation, super-consciousness, Krishna and Christ, and spiritual solutions to today’s social and economic problems such as war, corruption, environmental destruction, and poverty.