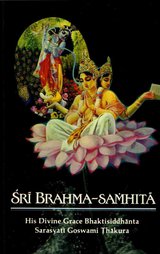 Sri Brahma Saṁhita is a Sanskrit poem, composed of verses of prayer spoken by Brahma glorifying the supreme Lord Kṛṣṇa or Govinda at the beginning of creation, as per Hindi Theology. It is revered within Gauḍiya Vaiṣṇavism, whose founder, Caitanya Mahāprabhu (1486–1534), re-discovered a part of the work, the 62 verses of Chapter 5, at the Adikeshav Temple in Thiruvattar, Tamil Nadu, South India in the 16th Century which had previously been lost for a few centuries.

This commentary of Sri Brahma-samhita was written by Srila Bhaktisiddhanta Sarasvati Thakur, the spiritual master of Srila Prabhupada, who spread Krishna consciousness all over India during the early twentieth century. Just the 62 verses encapsulate the entire Gaudiya Vaisnavacosmogony and theosophy.

In popular culture : George Harrison in 1970 produced a modern recording of these prayers performed by devotees of the Rādha Kṛṣṇa Temple in London. Titled “Govinda”, the song took its title from the main chorus line of the prayer “govindam ādi-puruṣam tam ahaṁ bhajāmi”, meaning “I worship Govinda, the primeval Lord”. This prayer was sung by Yamunā Devi, a disciple of A.C. Bhaktivedanta Swami Prabhupāda.